Dear McKoy: Thinking About Making My Teacher Take My Virginity

To Jess Buslewicz, it was a normal Wednesday laying on her couch until she got a notification saying, “You have received $3,000 from Taylor Nation LLC.”

Buslewicz, who was a sophomore at Smith College in Northampton, Massachusetts, had to return home to Newington, Connecticut, due to the rapid spread of the coronavirus. She lost her job as an on-campus tour guide and her babysitting job, both of which helped pay for her school books and tuition.

On top of everything, her mother has also lost much of her work as a travel agent as people around the country are staying at home.

Buslewicz, who has been a massive Taylor Swift fan since the age of 7, has been running a blog on the popular social media site Tumblr dedicated to Swift and her fans known as “Swifties.” One night, she took to the site to explain her family’s hardships and posted her Venmo and PayPal information.

Most of her followers donated $5 or $10, for which she was grateful. But it wasn’t until Wednesday evening that she received the notification. 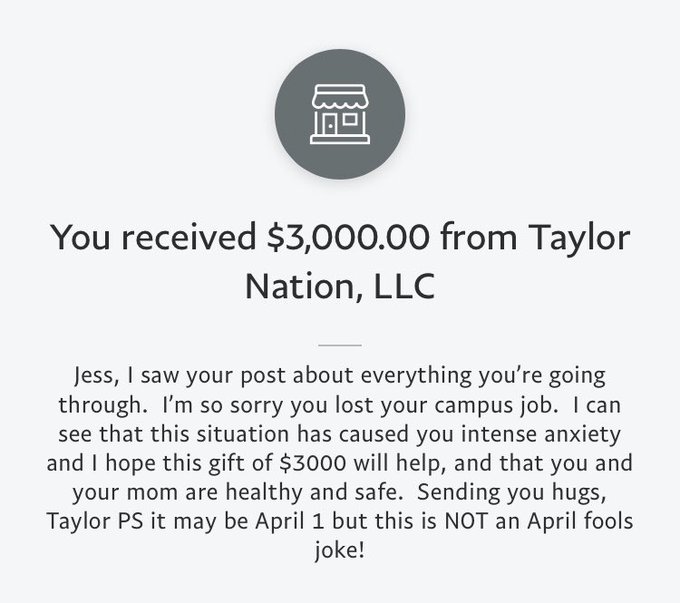 222 people are talking about this

“Jess, I saw your post about everything you’re going through, I’m sorry you lost your campus job. I can see that this situation has caused you intense anxiety and I hope this gift of $3,000 will help and that you and your mom are healthy and safe. Sending you hugs, Taylor,” the singer wrote in the message section.

She also included a small note saying that though it was April 1, it was not an April Fool’s joke.

Taylor Swift is among many celebrities that have been giving fans donations in their time of need during the coronavirus pandemic. Swift also gave a New York woman $3,000 gift.

Knavi Ready To Get Back in Music Hot Again

Dear McKoy: My Sugar Daddy is a Senator