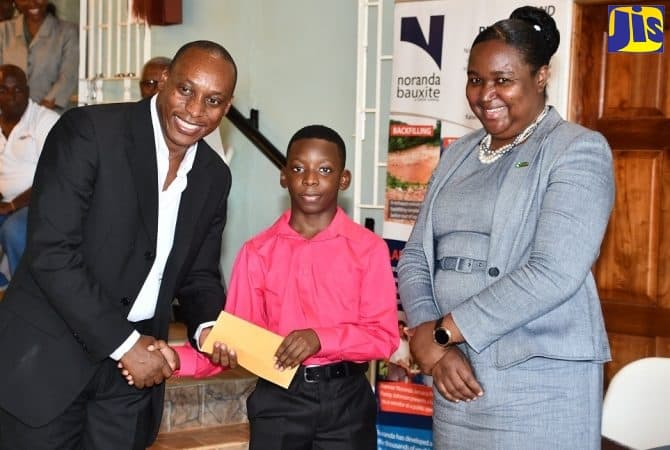 Jamaica News: Noranda Jamaica Bauxite Partners has, this year, expanded the scope and level of assistance provided to students in St. Ann through the entity’s Education Trust.

These, according to Vice President and General Manager, Delroy Dell, include the introduction of two five-year scholarships, valued at $100,000 per annum, to be awarded to the top performing boy and girl in the Primary Exit Profile (PEP) examinations.

The firm will also be awarding three tertiary scholarships for undergraduate studies in medicine, agriculture, engineering or education.

The Noranda executive also announced increased education bursaries, valued at $60,000 each, to 60 tertiary students residing in communities contiguous to the entity’s operations.

Mr. Dell said Noranda’s gesture was in recognition of education being vital to nation building and essential to the development of Jamaica’s human capital.

“Noranda has made education a top priority among our community outreach projects. For us, it is more than just a social obligation. It is another expression of our interest in education and the value we have placed on investment in the youth of our communities and our country,” he added.

Against this background, Mr. Dell called for public-private partnerships to be forged to “strengthen the foundation of our early childhood system in Jamaica”.

He emphasised that the earliest years of a child’s life are critical to their development, adding that investing in early childhood education is a direct investment in Jamaica’s sustainable growth.

For her part, Acting Permanent Secretary in the Ministry of Education, Youth and Information, Dr. Grace McLean, lauded Noranda for its commitment to enhancing education in St. Ann

“You are helping poor Jamaicans to maximise their full potential. You are doing a lot and that is excellent. Education is a partnership,” she stated.

The inaugural Noranda PEP Scholarships, along with two laptops, were presented to Abrianna Greaves and Jamari Green of Servite Primary School in Brown’s Town.

Over the last 10 years, Noranda has awarded over 700 awards of merit, valued at $25,000 each, to the top primary GSAT students among primary schools in the company’s operating area.

The entity has also provided over 1,200 bursaries, valued at $50,000 each, to students entering tertiary institutions, since 2004.