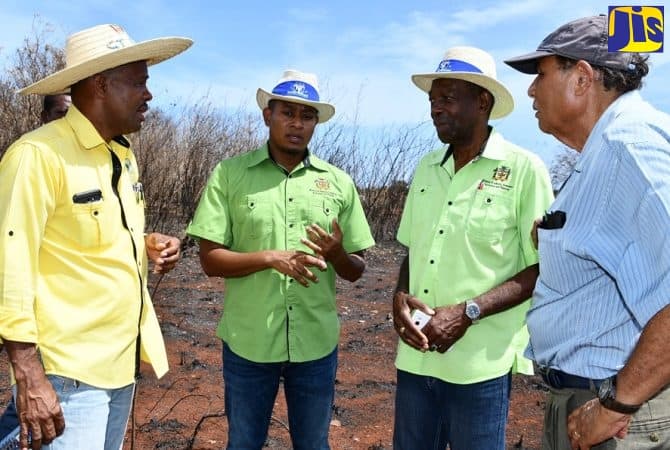 Jamaica News: Minister without Portfolio in the Ministry of Industry, Commerce, Agriculture, and Fisheries, Hon. J.C. Hutchinson, has indicated that help is on the way for 47 farmers whose farms were recently devastated by fire in the community of Flagaman, St. Elizabeth.

An assessment conducted by the Rural Agricultural Development Authority (RADA) is estimating losses at $45 million.

Speaking yesterday (August 20) following a tour of the affected areas, Mr. Hutchinson said the Government is moving to ensure that farmers rebound as quickly as possible, in an effort to prevent an increase in prices for produce.

“We in the Ministry will be doing whatever necessary. I have spoken with the Permanent Secretary and he is waiting for the assessment. It is difficult to get back into production, but we are going to see whatever way possible, we can assist you in getting back some grass, because I understand that is the basic material that you want, before you can even start,” he said.

In light of the extensive fire which destroyed farms on Friday, August 16, Minister Hutchinson along with Minister of State in the Ministry, Hon. Floyd Green, toured farm areas of Flagaman to get a first-hand view of the damage.

Farmers lost various crops, as well as equipment such as drip hoses and water storage tanks.

For his part, Mr. Green noted that the agricultural sector suffered significant losses as a result of the fire.

He informed that the Government is moving speedily to craft a programme of intervention.

JISCO/Alpart Giving Back to Communities

“We will craft a programme in relation to how we can intervene… My hope is that we will be able to do that before the end of the week so we can say to you, this is the methodology,” Mr. Green said.

In the meantime, one of the affected farmers, Zenora Davis, said she lost two acres of crops, and is eagerly awaiting the Government’s help to resume production.

“I lost…cantaloupe, watermelon and half acre of guinea grass. I lost about two million dollars. We need Guinea grass first of all, because we can’t do anything without it,” she stated.