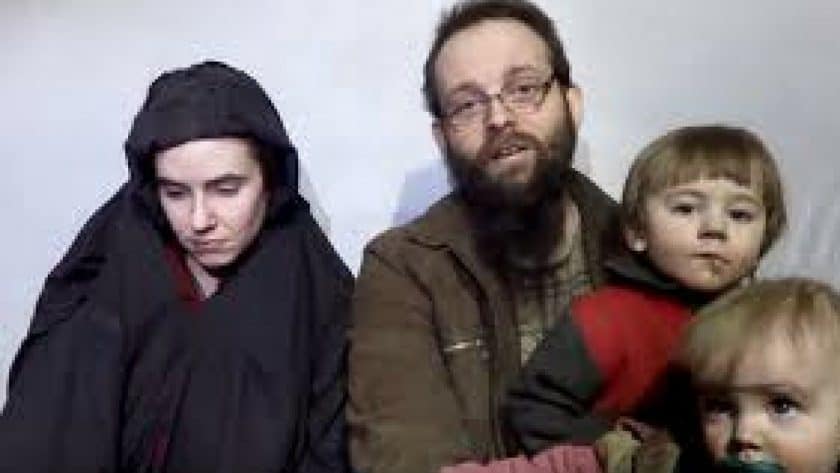 Washington, United States of America (AP)- Family Held Captive By Taliban-Linked Group Released: An American woman, her Canadian husband and their three young children have been released after years held captive by a group that has ties to the Taliban and is considered a terrorist organization by the United States, U.S. and Pakistani officials said Thursday.

U.S. officials said Pakistan secured the release of Caitlan Coleman of Stewartstown, Pennsylvania, and her husband, Canadian Joshua Boyle, who were abducted five years ago while traveling in Afghanistan and held by the Haqqani network.

Coleman was pregnant at the time, and gave birth to her three children while in captivity, officials said.

“Today they are free,” President Donald Trump said in a statement, crediting the U.S. government with securing the release “working in conjunction with the Government of Pakistan.”

Trump later praised Pakistan for its willingness to “do more to provide security in the region” and said the release suggests other “countries are starting to respect the United States of America once again.”

The Pakistani military said the family had been freed in “an intelligence-based operation by Pakistan troops” after they’d crossed the border from Afghanistan.

Boyle and the High Commissioner for Pakistan to Canada described a dramatic scene in which gunshots rang out as Boyle, his wife and their children were intercepted by Pakistani forces while being transported in the trunk of their captors’ car. Boyle told his parents there’d been a shoot-out and that the last words he’d heard from the kidnappers were, “kill the hostage,” his father, Patrick told The Toronto Star after speaking with his son. Three intelligence officials said the confrontation happened near a road crossing in the Nawa Kili area of the district of Kohat in northwest Pakistan.

The high commissioner, Tariq Azim Khan, said, “We know there was a shootout and Pakistan commandos carried out an attack and rescued the hostages.”

The Pakistani military said early Thursday the family was “being repatriated to the country of their origin.”

But as of Thursday midday, the family’s precise whereabouts were unclear, and it was not immediately known when they would return to North America. The family was not in U.S. custody, though they were together in a safe, undisclosed location in Pakistan, according to a U.S. national security official, who wasn’t authorized to discuss the case publicly and spoke on condition of anonymity.

A U.S. military official said that a military hostage team had flown to Pakistan Wednesday, prepared to fly the family out. The team did a preliminary health assessment of the family and had a transport plane ready to go. But sometime after daybreak there, as the family members were walking to the plane, Boyle said he did not want to board.

Another U.S. official said Boyle was nervous about being in “custody” given his background.

Boyle was once married to Zaynab Khadr, the older sister of former Guantanamo Bay detainee Omar Khadr and the daughter of a late senior al-Qaida financier. Her father, Ahmed Said Khadr, and the family stayed with Osama bin Laden briefly when Omar Khadr was a boy.

The Canadian-born Omar Khadr was 15 when he was captured by U.S. troops following a firefight at a suspected al-Qaida compound. He was taken to Guantanamo and ultimately charged with war crimes by a military commission. He pleaded guilty in 2010 to charges that included murder and was sentenced to eight years plus the time he had already spent in custody.

Several years ago, Zaynab Khadr and her mother also upset many Canadians by expressing pro-al-Qaida views.

Officials had discounted any link between that background and Boyle’s capture, with one official describing it in 2014 as a “horrible coincidence.”

The couple has told U.S. officials they wanted to fly commercially to Canada, according to the official, who spoke on condition of anonymity because he wasn’t authorized to speak publicly about the situation.

The Toronto Star reported that Boyle spoke to his parents after his release. “Josh said he was doing pretty well for someone who has spent the last five years in an underground prison,” his father told the paper.

“We got to hear his voice. It was amazing. He told us how much his children were looking forward meeting their grandparents,” his mother, Linda Boyle, said.

Coleman’s parents, Jim and Lyn Coleman, meanwhile, posted a statement on the door of their Pennsylvania home saying they appreciated “all the interest and concern being expressed at the joyful news that Caity, Josh and our grandchildren have been released after five long years of captivity.”

The release came together rapidly Wednesday. It happened nearly five years to the day after Coleman and Boyle lost touch with their families while traveling in a mountainous region near the Afghan capital of Kabul.

The couple set off in the summer 2012 for a journey that took them to Russia, the central Asian countries of Kazakhstan, Tajikistan and Kyrgyzstan, and then to Afghanistan. Coleman’s parents last heard from their son-in-law on Oct. 8, 2012, from an internet cafe in what Boyle described as an “unsafe” part of Afghanistan.

The only trace of the couple since has been in the form of videos released by their captors and family letters.

Coleman’s parents told the online Circa News service in July 2016 that they received a letter from their daughter in November 2015, in which she wrote that she’d given birth to a second child in captivity. It’s unclear whether they knew she’d had a third.

“I pray to hear from you again, to hear how everybody is doing,” the letter read.

In that interview, Jim Coleman issued a plea to top Taliban commanders to be “kind and merciful” and let the couple go.

Boyle’s parent, s said last year that a Taliban-released video had given them their first glimpse of their grandchildren.

“It is an indescribable emotional sense one has watching a grandson making faces at the camera, while hearing our son’s leg chains clanging up and down on the floor as he tries to settle his son,” the Boyles said in a written statement. “It is unbelievable that they have had to shield their sons from their horrible reality for four years.”

The parents say their son told them in a letter that he and his wife have tried to protect the children by pretending their signs of captivity were part of a game being played with guards.

“It is simply heartbreaking to watch both boys so keenly observing their new surroundings in a makeshift film studio, while listening to their mother describe how they were made to watch her being defiled,” the Boyles said.

U.S. officials call the Haqqani group a terrorist organization and have targeted its leaders with drone strikes. But the group also operates like a criminal network. Unlike the Islamic State group, it does not typically execute Western hostages, preferring to ransom them for cash.

The U.S. has long criticized Pakistan for failing to aggressively go after the Haqqanis. In recent remarks on his Afghanistan policy, Trump noted billions paid to Pakistan “at the same time they are housing the very terrorists that we are fighting. But that will have to change, and that will change immediately.”

In his statement Thursday, Trump described the release as “a positive moment for our country’s relationship with Pakistan.”

“The Pakistani government’s cooperation is a sign that it is honoring America’s wishes for it to do more to provide security in the region,” he said. “We hope to see this type of cooperation and teamwork in helping secure the release of remaining hostages and in our future joint counterterrorism operations.”

Canadian Foreign Minister Chrystia Freeland said her country was “greatly relieved” the family was safe, and she thanked the U.S., Afghan and Pakistani governments for their efforts.

“Joshua, Caitlan, their children and the Boyle and Coleman families have endured a horrible ordeal over the past five years. We stand ready to support them as they begin their healing journey,” Freeland said.