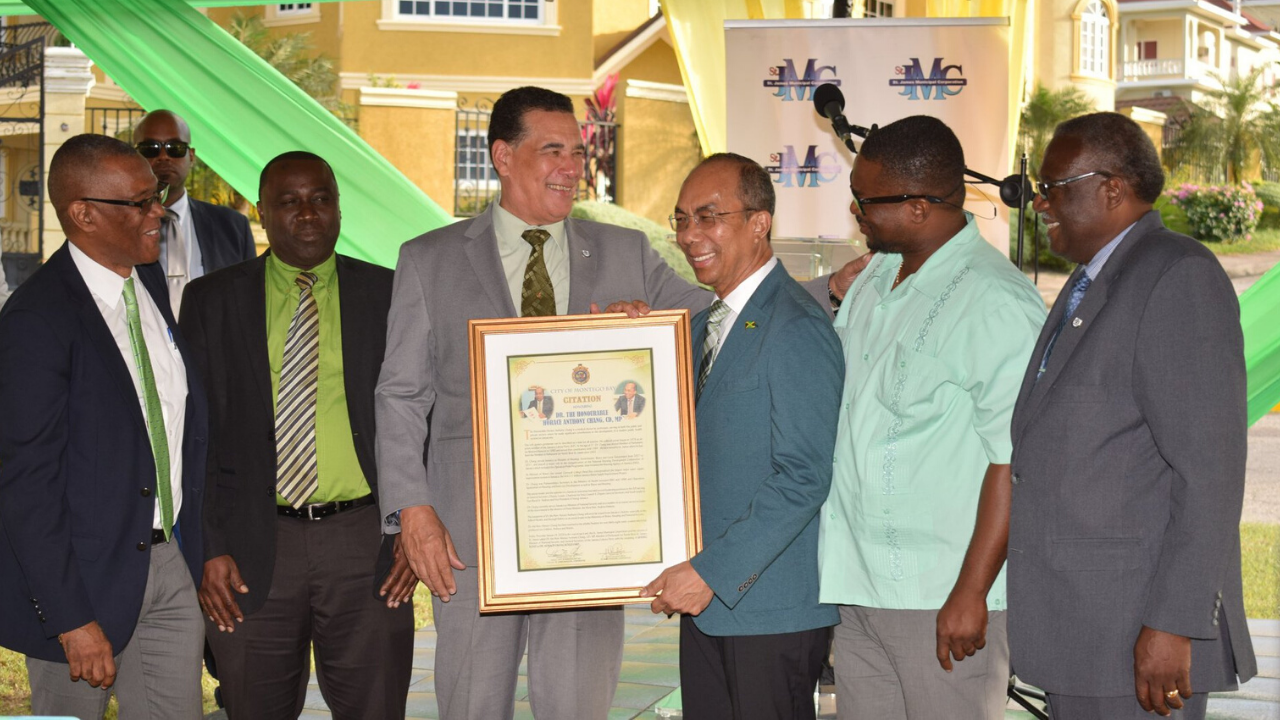 Latest Jamaica News, Montego Bay (McKoy’s News):  Mayor of Montego Bay and Chairman of the St. James Municipal Corporation, Councillor Homer Davis is pleased that under his watch, a commitment to rename the former Quebec Avenue to Dr. Horace Chang Boulevard has been fulfilled.

Speaking at a dedication ceremony on Thursday, January 9, 2020, where the name change was made official, Mayor Davis said the renaming of the thoroughfare was a fitting tribute to Dr. Chang, a man who has served Jamaica in various capacities in the public and private sectors.

Mayor Davis said, “On behalf of the Councillors of the Municipality, I express profound happiness in being able to deliver today on a commitment…that of affixing the name of Dr. Horace Chang to this roadway…a thoroughfare which he conceptualized and built for the wonderful people of St. James in general and the community of Norwood in particular. Today’s ceremony is a dream come true for me and for members of the political directorate of the St. James Municipal Corporation.”

He said Dr. Chang has been a mentor to many and a political father to a number of former and serving politicians to include Senator Charles Sinclair, Member of Parliament Heroy Clarke and himself as Mayor of Montego Bay.

“This honor is being bestowed on someone who is truly deserving…He is a father to many, a mentor, a friend, a true servant of Jamaica, is indeed one of them, a friend of Jamaica and Jamaicans, a forward thinker, a visionary and indeed a very dedicated son of St. James and our beautiful island. Dr. the Hon. Horace Anthony Chang is a man for all seasons, a man who is a true and humble servant of not just the people of St. James but Jamaica, the Caribbean and the world”, Mayor Davis said.

As Mayor Davis continued to heap praises on Dr. Chang, he drew reference to a quote from the “God Father” which says “Great Men are not born great, they grow great”, pointing out that the Government minister has grown into being a great elder statesman.

He said: “that saying is very apt as we gather here today to pay homage to a great man….a man who has indeed grown to be one of Jamaica’s great elder statesman….Dr. the Hon. Horace Anthony Chang”

Meanwhile, the National security Minister is also being lauded for the roles he has played as a Medical Doctor and in various areas of government.

Mayor Davis pointed out that the footprints of Dr. Chang will never be erased from Jamaica’s history, especially in the medical and political fields.

“The impact that Dr. the Hon. Horace Chang has had on Jamaica’s medical sector is unprecedented both in the public and private sectors. This Jamaican Ambassador has served with utmost distinction in the field of politics, and by extension in the Ministries of Health, Water, Housing, Environment, Economic Growth and Job Creation and now in the Ministry of National Security. This honour for Dr. Chang could not have happened at a better time”

Mayor Davis also thanked Councillor Joshua Cummings who moved the motion in Council for this renaming and Councillor Senator Charles Sinclair who supported it.

He added that the new Dr. Horace Chang Boulevard has given the people of St. James an opportunity to tell this giant of a man how much he is appreciated.

“The life and times of Dr. Horace Chang is surely an inspiration to all and should be shared among our people as we celebrate one of our own. It is important for us to recognize our people when they are alive…We should not be scattering roses at a time when our great men and women are unable to hear grand pronouncements and see the roses. There are several heroes and heroines among us and Dr. Chang is a hero among us” Mayor Davis said.